For a listing of all the latest site updates, visit the content index page or the site update log.
Previous12345Next
News Tag Filter:TOMY

Posted by Sunain | May 1st 2021 at 10:32 AM EDT
Tags: Anime, Merchandise, TOMY
Comments: 0
Permalink
TOMY has revealed the Pocket Monsters Live Sound Stadium Pokémon World Championship which features Satoshi and Go from the Pocket Monsters anime. The stadium will go on sale in Japan on June 19th, 2021 for 6,160 yen (tax included). High resolution images of the product have been added to an Imageboard thread. ① Unleash! Battle Command!
When you press the button, you'll hear the sounds of Mega Evolvution, Z-Move, Gigantamax, and Dynamax!
"It's a powerful Dynamax battle!" "It's a Mega Evolution, an evolution beyond evolution!"
Let's win the Pokémon World Championships with your Moncolle!

② In addition to the above, you can also hear powerful "Thump" and "Smack" battle sounds! When you impact the field (floor), the noise of the attack will sound!

④ Live Voices make the battles get more exciting!
"You hit the target!" "This one's excellent!"
If you press the button during the battle, live commentary will sound! You can create your own original battles!

Posted by Sunain | April 29th 2021 at 05:52 PM EDT
Tags: Anime, TOMY, Plushies
Comments: 0
Permalink
TOMY has revealed a new line of Pocket Monsters 2019 Pokémon Plushies featuring character Pokémon from the anime series. Satoshi's Pikachu and Koharu's Eievui will be available in Japan for 2,500 yen each (tax included) on June 19th, 2021. High resolution images of the plushies and packaging have been added to an Imageboard thread. The Pokémon Plushie is a series of plushie toys with cute and cool expressions of Pokémon that are comfortable to the touch. The lineup features a wide range of Pokémon from the anime! The hat can be removed.

The Pokémon Plushie is a series of plushie toys with cute and cool expressions of Pokémon that are comfortable to the touch. The lineup features a wide range of Pokémon from the anime! The female version has a heart-shaped tail. TOMY has announced the Pokémon Plushie Shaking Bachuru with Wanpachi plushie set will be released exclusively on the TOMY Mall eshop for 6000 yen. Pre-orders are open from April 28th, 2021 at 12:00 until May 31st, 2021 at 13:00. High resolution pictures of the plushies have been posted on an Imageboard thread.

Bachuru and Wanpachi are now available as 1:1 plush toys with a shaking gimmick, exclusively at TOMY Mall! Bachuru's Pokémon Zukan entry says, "Bachuru can be found clinging to other Pokémon. It’s soaking up static electricity because it can’t produce a charge on its own." and this product reproduces that.

It's a very adorable plushie that when you pull on Bachuru, it shakes its way to Wampachi's hips. The size of the product is approximately 30cm in height, 19cm in width, and 40cm in depth, making it 1:1 size. Toy manufacturer TOMY and game manufacturer Marvelous Inc. announced that in just over 6 months since the games launch on September 17th, 2020, the amusement machine Pokémon Mezaster has ships over 30 million tags and there is now more than 500,000 Pokémon Mezaster Trainers nationwide in Japan! High resolution artwork from the press release has been added to an Imageboard thread.

Pokémon Mezastar is the first Pokémon arcade game to feature a large-screen twin cabinet where adjacent screens can be linked for cooperative battles. This is the latest amusement machine that allows players to battle Pokémon, catch Pokémon, and collect tags that are distributed from the machine. As the successor to Pokémon Ga-Olé, Pokémon Mezastar went into operation on September 17th, 2020 and in just one week, the number of tags dispensed reached approximately 2.4 million. One month after the start of operations, the number of tags shipped exceeded 10 million, and six months later, on March 31st, 2021, the number of tags shipped finally exceeded 30 million. Also, on April 12th, 2021, the number of Pokémon actually acquired exceeded 30 million. As of March 20th, 2021, the total number of registered users with Memory Tags, an item that allows you to record game data, exceeded 500,000, which means that more than 500,000 Trainers that have been actively playing nationwide.

One of the most popular features of Pokémon Mezastar is the Special Tag Battle, which can occur when two Trainers are playing next to each other, and the normally two separate screens are connected and combined into one screen. The game is gaining popularity because it allows users to enjoy powerful cooperative battles between friends, parents and children, and sometimes even between users who happen to be next to each other. In addition, the Mezastar Club, a free web service that allows players to register if they have a Memory Tag, will have new elements added with the launch of the 4th set, such as dress-up items for players' avatars and the ability to use them to change their look. In addition, they will be conducting a campaign to distribute free tags in stores to show the fun and appeal of Pokémon Mezaster to new users. The popular "Munyumaru (むにゅまる)" line with its soft, marshmallow-like texture which is small, rounded-shaped form, has new items in the lineup! This time, the lineup includes four new Pokémon types: Plusle, Minun, Pochama and Pichu. Together with the existing 16 Pokémon, the lineup has a total of 20. The size is easy to hold and collect, so it is recommend to collect as many as you can and pile them up to display or use as hand rests. Find your favorite Pokémon and feel relaxed by them. Images of the plushies have been added to an Imageboard thread. 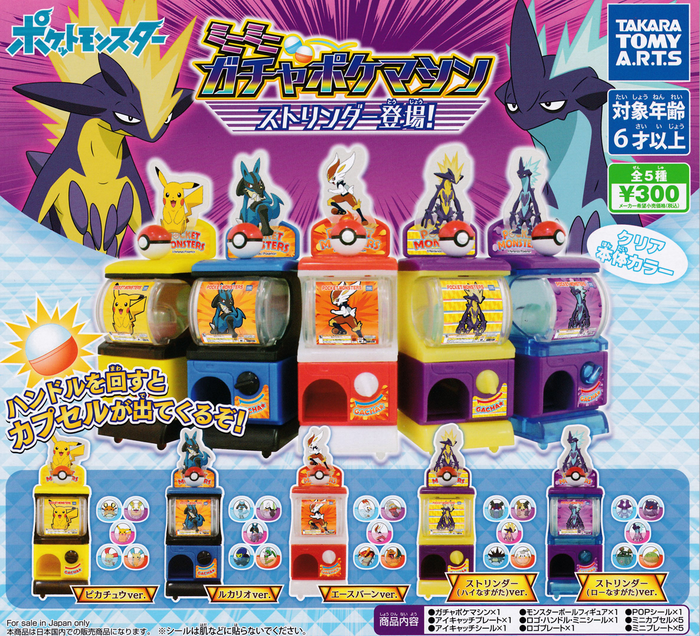 Takara Tomy has revealed the Pocket Monsters Mini Mini Gacha Poké Machine (ポケットモンスター ミニミニガチャポケマシン) and it is now available for purchase in Japan. There are 5 different mini machines and they each cost 1400 yen including tax. The machines are branded with the Pocket Monsters 2019 logo and features Satoshi and Go's Pokémon.

There are 5 different machines to collect:
Each machine includes: